Have you heard that Leavenworth is going to be in the movies again?

Ira Finkelstein’s Christmas Vacation is the story "of a Jewish kid who'll stop at nothing to celebrate Christmas." 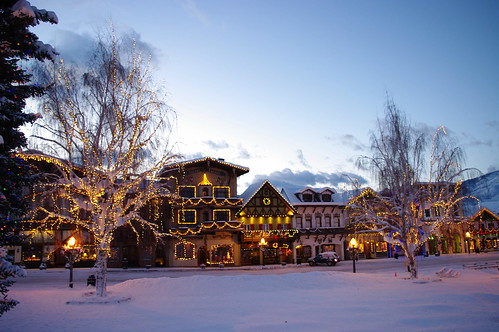 Written and produced by Von Piglet Productions, it was originally to be set in a Christmas town in Vermont. However, after a couple of location scouting trips to Leavenworth they have decided to not only film here, but also to change the story so that it actually takes place in Leavenworth as well.

Filming will occur in mid-February through early March so you'll likely see the Christmas lights up a little longer this year. (You can spread the word that it's not lazy shopkeepers who haven't gotten around to taking down their lights, the lights will be up for a reason.)

Apparently there will be a scene that includes a Christmas parade in downtown Leavenworth. If we get the word about a need for extras we'll be happy to pass it along.

My name is Ryan Ricks. I'm the Extra’s Coordinator for “Ira Finkelstein’s Christmas.”

If you want to take part in more than just the parade, contact me with your first/last name, phone/email, age, pant/shirt size, and availability from MARCH 1 – MARCH 6,+ MARCH 13.

Specify if you are available DAY, NIGHT, OR BOTH FOR EACH OF THE ABOVE... DATES.

END_OF_DOCUMENT_TOKEN_TO_BE_REPLACED

For over a decade, Allyson and Geordie have been serving clients in the Lake Wenatchee and Leavenworth real estate market. Together, they work tirelessly to stay on top of the regional market and present the most relevant opportunities to their clientele.

Are you looking for a cabin or a condo in Leavenworth that your family can use as a home base when climbing, skiing or hiking around Leavenworth or Lake Wenatchee?

Maybe you rent a house here and have decided to stay, surprised how a summer of rafting somehow turned into seven years.

Maybe it’s time to escape the hustle of the big city (and its rain) and move to Leavenworth with its four seasons.

Maybe you bought a condo years ago, don’t seem to use as much, and it’s time to sell.

Whatever your motivation, we are here to help. If you are buying a home, the best place to start is with our Homebuyer’s Guide to Leavenworth.